The National Council on Drug Abuse has conducted multiple studies to determine the prevalence and patterns of substance use among the following groups:

Prison population through the Prison Survey (2014)

These studies have been conducted through technical and funding support from the Organization of American States (OAS), the Pan American Health Organization (PAHO), the US Centers for Disease Control & Prevention (CDC) and the Global Fund for Tuberculosis, Malaria and AIDS. Local and regional technical expertise is provided by the academic community (University of the West Indies & University of Technology, Jamaica) to support the implementation, analysis and dissemination of these studies.

The above-mentioned studies have consistently shown that ganja, alcohol and tobacco are the three main substances used by the Jamaican population over the last several decades. Alcohol continues to be the most widely used psychoactive substance, with 75% of the general population reporting use at some point in their lifetime and 4 in 10 people (40%) reporting current use (NHS, 2016). Among the secondary school population, 49% (approximately 5 in 10 students) currently use alcohol (GSHS, 2017).

Ganja Use among the General Population

The 2016 NHS study found that 28% of the population 12-65 years reported that they used ganja at some point in their lifetime. This reflects a 9% increase since 2001 when lifetime prevalence of ganja use was 19%.

Overall 16% of Jamaicans currently use ganja, which is almost double the proportion since 2001 (9%).

Significant gender differences in usage exists, with 5% of females reporting current ganja use compared to 27% of males.

The average age of first use was 16 among males and 18 among females.

Half of the past year users of ganja (50%) were categorized as being at high risk of addiction as measured by the Cannabis Abuse Screening Test (CAST).

Current Prevalence of Ganja Use by Parish (NHS, 2016) 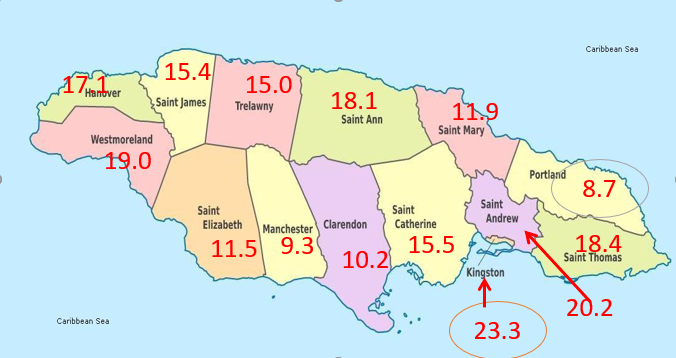 Use of ganja in concentrates, soaps and medicines was reported by less than 2% of the population.

10% of 12–17-year-olds perceived that there was no, or low risk associated with frequent ganja use. This perception could fuel the early initiation of use.

70% of the population reported having easy access to ganja while half of the secondary school population (50%) reported that illegal drugs were sold in and around their school compounds (NSS, 2013).

Studies have shown that easy access coupled with low risk perception of harm are associated with the use of psychoactive substances. So, efforts to restrict access and increase the perception of harm, particularly among youth, are crucial.

The NSS revealed that 20% of Jamaican secondary school students have smoked ganja at some point in their lifetime while just over 10% smoked it in the past year and 6% in the past month.

The average age of first use was 13 years old. This has increased by approximately one year since the 2006 survey. This is an indication that the age of initiation is going up.

Prevalence of ganja use was significantly higher among the 15-16 age group compared to the 11-14 and 17+ age groups, respectively and higher among males than females.

There has been an increase in ganja use among female students since the 2006 survey.

One in five students who were current users were at risk for addiction, as measured by the Cannabis Abuse Screening Test (CAST).

The NSS also revealed that parental smoking, poor school performance and behavioural/disciplinary problems were associated with students’ ganja use

Students who reported that their parents knew their whereabouts after school and on weekends, knew the type of TV shows they watched, ate meals together and knew their close friends well reported significantly lower levels of ganja use and lower risk of misuse/addiction.